T6 is a highly integrated, hyper-virtualized 1/10/25/40/50/100 GbE controller with full offload support of a complete Unified Wire solution. T6 provides no-compromise performance with both low latency (sub 1µsec through hardware) and high bandwidth, limited only by the PCI bus. Furthermore, it scales to true 100 Gigabit line rate operation from a single TCP connection to thousands of connections, and allows simultaneous low latency and high bandwidth operation thanks to multiple physical channels through the ASIC.

Designed for high performance clustering, storage, cloud, and data networking, T6 enables fabric consolidation by simultaneously supporting TCP/IP and UDP/IP socket applications, RDMA applications and SCSI applications at wire speed, over legacy switching infrastructure, thereby allowing InfiniBand and FibreChannel applications to run unmodified and concurrently over standard Ethernet. This will result in tremendous savings in the data center by avoiding the need for InfiniBand or FibreChannel adapters, cabling, switches and gateways. Thanks to the reliability provided by hardware offloaded TCP/IP, the benefits of T6 RDMA include eliminating the scalability and cabling and noise issues associated with IB-FDR.

Support for integrated TLS/SSL/IPsec and SMB 3.X crypto allows for tremendous differentiation for the end product. For example, T6 can encrypt/decrypt network data at line rate and in an in-line fashion, while concurrently doing encryption/decryption of storage data in a co-processor mode, thus enabling concurrent secure communication and secure storage, all for the price and power of a typical NIC. 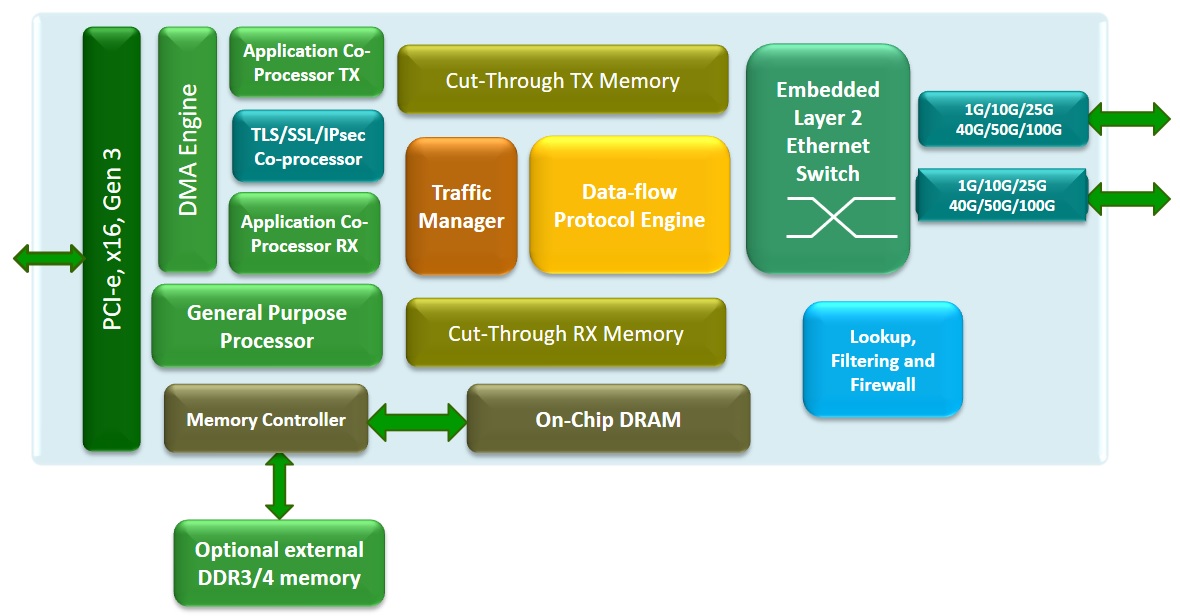 The T6 ASIC is built around a highly scalable and programmable protocol-processing engine. Much of the processing of the offloaded protocols is implemented in firmware running on a proprietary pipelined data-flow processor. The pipeline supports cut-through operation for both transmit and receive paths for minimum latency, and the transport processor is designed for wire-speed operation at small packet sizes, regardless of the number of connections. Some key features of T6:

Some key software support of T6: